Spring Cleanup: Dealing With All Those Skeletons in the Closet 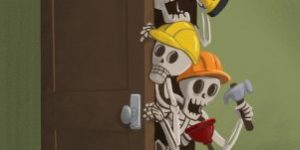 The days are getting longer, the air is warmer and it’s safe to say that everyone is happier that six months of winter has ended. And you know what that means for condominium corporations—spring cleanup.

The projects that were held over from 2018 (or longer, depending on your reserve fund), the dirt and debris that has piled up over the winter and the general maintenance that needs to be done in warmer weather, are now items that can be tackled. Does your corporation have go-to contractors that you routinely use for maintenance and renovation projects or are you in the market to find the right crew? Either way, it’s a good idea to review the basics when hiring anyone to work on your building. A great property manager can act as a go-between with contractors and the condo board, but choosing those contractors in the first place comes down to the board.

“Spring is probably the most important time of year to conduct a visual review of your property and building, from the lowest level of the parkade to the rooftop,” says Brian Shedden, Principal at Entuitive, a consulting engineering practice. “A spring thaw reveals a lot of things that may have gone unnoticed before, things like a leaky roof, loose equipment, uneven concrete or paving, failing sealants or foggy window glazing.”

Before a contractor even steps on site, when the contract is at the tendering stage, the condo board should be asking them to provide a valid certificate of insurance that shows a minimum of $2 million in liability coverage, preferably $5 million, according to Dawn Mitchell, Senior Commercial Account Executive of HUB International Insurance Brokers.

“We had one corporation where the owner was doing a bathroom reno and their friend was soldering the pipes in the bathroom and set the unit on fire,” Mitchell recalls. “If they had hired a contractor, the contractor would have had the proper coverage. As it was, it was just a friend of the owner and there was no ability to seek restitution back for the damages caused by the person that started the fire.”

The fire ended up damaging all four units of this townhome as all four bathrooms were connected via pipework on the inside. Mitchell says the corporation’s property insurance responded against the damage, but the insurers had no one to claim damages from. Now it shows as a huge claim on the corporation’s policy.

Having a list of questions prepared for any potential contractors is a good idea, you might even want to create a checklist that the board can have readily at its fingertips. Most important are to make sure the contractor adds the condominium corporation as an additional insured on its insurance and has WCB coverage for its workers, even when hiring general maintenance work like snow shovelling and lawn mowing.

“What that does, especially with snow removal contractors, because we all know we have snow and ice, is if somebody slips and falls and breaks their leg, the lawyer’s going to cast the widest net that they possibly can. If [the corporation is] added as an additional insured on the contractor’s policy, then the contractor’s required to defend the condominium corporation through their insurance as opposed to using the corporation’s coverage. If the corporation didn’t do anything to cause the injuries, they’re not the ones that should be responsible for it,” Mitchell says.

If someone is injured or damages happen because of the corporation’s negligence, there’s a really good chance there will be legal involvement. Mitchell says winter is not the only time ripe with opportunities for injury or damages. If a contractor is mowing the lawn and they hit a rock that flies and damages a vehicle, then the owner will likely want reimbursement. If the contractor does not have insurance, then the corporation is responsible.

Beyond routine maintenance work, spring and summer tend to be the time when major renovations and other big projects get underway. Not every board has the time to properly vet contractors and often property managers play a big role in acting as go-betweens. Sometimes the communication line between the property manager, condo board and contractor could use some work if, for instance, the property manager hasn’t properly explained what’s happening to the board.

Dean Amundson, Project Manager for The Restorers Group, says if you’ve got good communication between the contractor, board and property manager, it makes the whole process smoother for everyone. It’s usually a good idea to have contractors meet with the board before work begins so that introductions can be made, and questions can be answered.

“It should be a fairly seamless process,” Amundson says. “For myself, as a contractor, it’s to educate the board, be there to help and make sure we’re doing the best we can, not be the fly by night contractor who is  in and out.”

Coming from the world of consulting to contracting, Amundson previously worked at Entuitive, he has a good understanding of when a board should be able to handle a project directly with a contractor and when hiring a consultant might make sense. Involving a consultant can offload responsibilities and paperwork from the board, while  ensuring the contractor adheres to the project contract documents.

“I’ve seen both sides now,” Amundson says. “I’ve been a consultant and I’ve been a contractor, there really isn’t a set-in stone project value for involving a consultant, rather the scope of work should play a role in helping with your decision. Reaching out to both contractors and consultants for their opinions, can sometimes feel like you are going in circles, however I feel it is a worthwhile exercise in order to develop and establish the appropriate course of action.”

What about getting a few projects done at once? Since the contractors will already be onsite, maybe it makes more sense to have them handle a number of projects at once. There’s no definitive answer, but Amundson recommends forecasting and developing a well thought out plan to execute concurrent projects located at one building, before awarding them to a contractor. This process could involve discussions between the contractor and board to develop an accurate scope of work and construction schedule. Ultimately you want to make sure that there is no overlap in scope of work where there could be a risk of incurring duplicate project costs.

“Let’s say you have a contractor working at your building, and you would like to address a few landscaping issues. Prior to performing the landscaping, current or future projects should be considered. For instance, if the buildings balconies are to have new vinyl membrane installed this season, it might make sense to defer the landscaping, as construction activity from the membrane replacement work could potentially impact this landscaped area.”

Pricing for projects can vary depending on the time of year and you might want to consider booking your contractors when their workload is not at capacity. Amundson gives the example of a heated parkade restoration project that would likely see better pricing if issued to  contractors later in the year, as opposed to spring, with work commencing in the fall and winter months.

At the end of the day, it all comes down to good communication between all parties involved: boards, property managers, contractors and consultants.

“The condo market is filled with tales of woe when it comes to having work done on a building or in a townhouse community,” Shedden says. “It is important to remember that as a board, you are running a multimillion-dollar business on behalf of each unit owner. There are way too many AGMs that go completely off the rails when a project has failed, usually by contractor error, and you must weigh the risk you are willing to take when not retaining a professional to act on behalf of the corporation. It is far too easy to be penny wise and pound foolish.”