How To Talk To Jerks 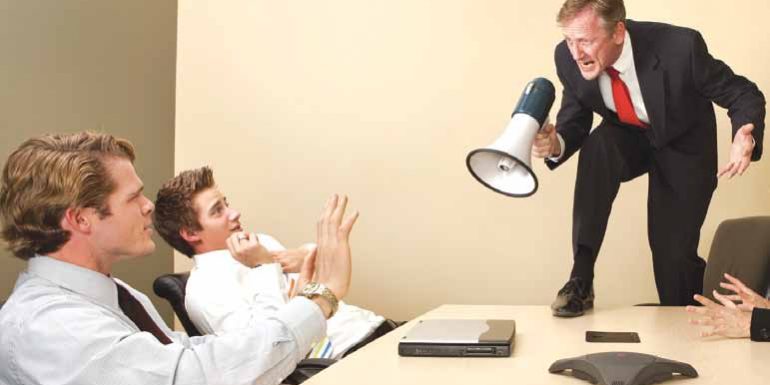 Anyone who’s ever been on a condo board or attended an AGM knows about the jerks. They’re loud, they’re angry. They’re pretty sure that everything that’s wrong is your fault, and they either want you to fix it or they want you fired.

Like anyone else, I encounter my fair share of jerks as I go through life. But in the three years I spent on my building’s board, we really had our fair share.

As much as we’d all sometimes like to just walk away from jerks and not have to deal with them, it isn’t really an option; especially in the world of condos where the
jerks are often our neighbours and fellow owners. We can try to simply dismiss them, to avoid them, or shut them out; but that will likely lead to an escalation of the
situation and more jerk pain down the road.

Besides, believe it or not, interacting with jerks can yield benefits. Here’s how:

Step 1: Remember What We Want
The first step when an angry, complaining, possibly even abusive person approaches us is to take a moment and decide what we want out of the encounter.

This list could go on forever, but the point is that our true goals for the interaction should guide how we handle it.

Be aware of pride and emotion in this situation. They can act as a powerful distraction and will often prevent us from getting what we really want at the end of the day. The most common and seductive form of this is known as “wanting to win”,
which is where we focus on beating the other person at the argument,
rather than on getting the result we actually want.

Step 2: Is the Jerk Really a Jerk?
Sadly there are some people who are chronically angry and unhappy, and who will never be satisfied with anything you do for them, no matter what. True, confirmed jerks have deep psychological and emotional issues that have nothing to do with you
but that definitely have impact on you because they’re often constantly looking for someone on whom to take out their pain. It’s tough when one of these people is an active member of a condo community or, worse, on the board.

We had one of these in my building during my tenure and we received daily emails from him about everything from his parking space to his upstairs neighbours to the
alleged fraud and corruption of our building manager. I took a year off from the board and he was elected in my place. When I returned the following year, the staff were on the brink of quitting and the rest of the board was in such a state of hostility
and mistrust, they could barely function.

Clues that someone may be a true jerk:

Happily, these true jerks are not that common. Most people are, at heart, fairly decent and can be reasoned with. They may be acting in a hostile manner for any number of reasons but they are not, at heart, unreasonable people.

In this case, what we have is not a true jerk, but a normal person who is acting like a jerk. With someone who’s only being a jerk in the moment, the situation is far easier to manage and turn to our advantage.

Step 2a: If They’re A True Jerk
The key word when dealing with a true jerk is compassion. A true jerk, someone who habitually handles interpersonal interactions with bullying, hostile, or even violent
behaviour as a matter of course, is likely not a very happy person. A person’s quality of life is heavily impacted by their relationships and someone like that probably doesn’t have great ones. Remembering that can help us keep our true goals in mind and avoid getting sucked into the hostility and drama of the situation.

Unfortunately, our options with a true jerk are limited. Depending on what we want out of the situation, we may engage with them long enough to get an understanding of what their current complaint is and attempt to address it. However, this is a situation where clear and healthy boundaries are required to protect ourselves. Be clear but calm with the jerk when he or she has crossed the line of what you’re willing to accept in terms of treatment and withdraw, even if you haven’t achieved either your goal or theirs. Do not engage in argument with a true jerk. It never ends well.

Step 2b: If They Aren’t A True Jerk
Usually, when someone is being a jerk, it’s because they have some legitimate reason to be upset. They may be so worked up about it that they become hostile, vulgar, or even abusive, but this by itself doesn’t mean you should withdraw immediately. Often, people who are acting this way have already tried and failed to get their needs met in a more civil manner and are now escalating to jerk behaviour because they don’t see any other way to be heard. It doesn’t make them right,
but it is normal and understandable human behaviour.

The best response is to listen to them, and genuinely seek to understand where they’re coming from. After a few minutes of sincere and engaged listening with a focus on understanding their position, most ‘jerks’ will calm down and really start
talking. This is the good stuff. This is where we get to learn about things
that are going on that we didn’t know about, or gain perspective we didn’t previously have. Listening to the ‘jerk’ and with a genuine wish to help them can often not only transform them from a jerk into a reasonable person, but even into an ally and supporter in future efforts.

Step 3: Loving the Jerks
In addition to offering an opportunity to learn and build connection, there’s another silver lining to people behaving like jerks. Most people can only be bothered to get worked up about something and speak up if they care about it. People act like jerks because they are engaged, because they are passionate, and because they believe that change and improvement is possible. If they don’t believe those things, they don’t bother. They withdraw. They shut up. They stop trying to make things better
and either become apathetic or leave.

The biggest risk to a group, be it a community, company, or association, isn’t jerks. It’s apathy. So embrace your jerks; they’re the embodiment of the passion we need to make our organizations vibrant.

Nadine is a ‘social capitalist’ and is the creator of PurposeFuel: a program that helps organizations achieve greater results through connection and purpose. She can be contacted at nriopel2@gmail.com.