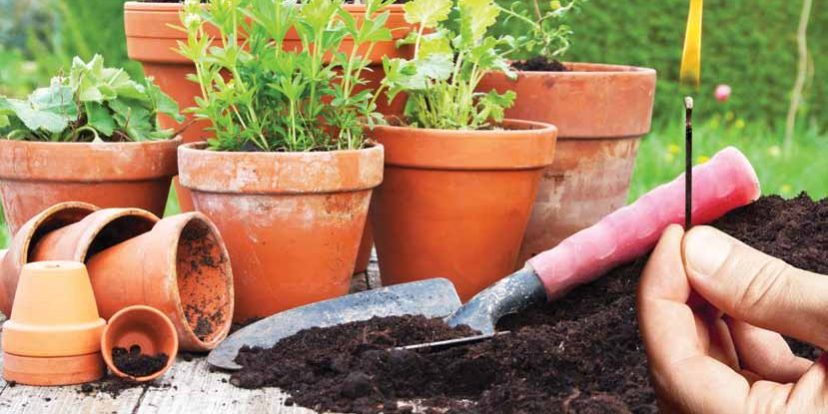 Potted flowers and plants can add a welcome touch of green to a condominium’s grounds, foyer, and common spaces such as social rooms and fitness centres. But did you know that they can also pose a serious danger? Over the last few years, fire departments throughout North America have reported a higher than average number of fires caused by potting soil and/or peat moss.

The majority of smokers today light up outside, where there are often insufficient ashtrays or receptacles for cigarette butts. Some will discard their cigarette butts in
any available container, such as a patio planter. And that can be very dangerous.

In Langley, BC last year, 100 people were forced from their residences due a fire caused by the disposal of a cigarette butt in a flower pot. The same carelessness was the cause of a 2014 fire in Edmonton that displaced 400 people, and a number of other serious condominium fires in Calgary, Montreal and elsewhere across Canada.

Fire departments warn that if a potted plant is allowed to dry out and something hot is placed in it, such as a cigarette, the potting soil can and will ignite. While banning smoking on condominium property can help reduce such risks, there are also numerous cases of flowerpot fires starting by spontaneous combustion.

Especially during dry, hot weather, potting soil can in fact self-ignite when a plastic planter is positioned in direct sunlight, neglected and allowed to completely dry out. This is because fertilizers in the soil can act as oxidizers that accelerate fires. Many potting soils on the market today contain less dirt and more organic substances that are flammable, such as shredded wood, bark, peat moss, styrofoam pellets and vermiculite.

How to protect your condo? If smoking is permitted on the premises, it is important to clearly delineate smoking areas, and ensure that these areas have sufficient receptacles for cigarette disposal. Warning signs can also be placed where there are potted plants. As for the planters themselves, use clay instead of plastic whenever possible. Do not keep potted plants near any other combustible materials, or store bags of potting soil in direct sunlight.

Your board should also be diligent regarding the proper maintenance of your potted plants, by keeping them well-watered and regularly removing any dead plants, leaves etc. The frequency of such maintenance should increase during hot dry sunny weather.

As with all risk management, an ounce of prevention
is worth a pound of cure. Stay safe!