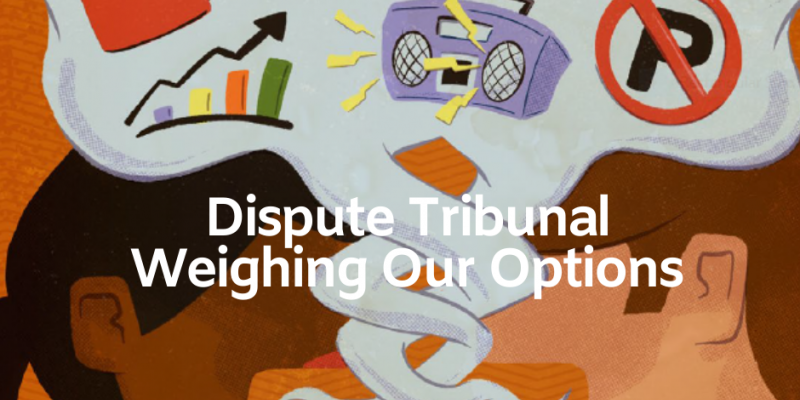 Bringing condo disputes before a tribunal instead of using the traditional courtroom process seems to be quite the dangling carrot for those who are intrigued by the idea of changing up the current system. The efficiency of using online technology to solve problems, and the time and cost savings that come about as a result—not to mention the reduction of bad feelings between neighbours—has led to much discussion for when Alberta institutes its own condominium dispute tribunal.

Back in December 2014, the Alberta Condominium Amendment Act was passed which included establishing a dispute tribunal system after other phases of the legislation were completed. However, five years later, the remaining legislation is finally being enforced as of January 1, 2020 with no timeline from Service Alberta as to when the dispute tribunal will be created or what the process will look like.

Currently in Alberta, condominiums do have the option of using either mediation or arbitration to resolve issues rather than going through the courts. While these methods are less costly and typically can be processed faster, they do require both parties to agree to participate which is problematic when you have someone unwilling to negotiate.

Dispute tribunals use a process that moves from negotiation to mediation to tribunal. Not all steps are necessary if disputes can be solved in the earlier stages. In Alberta, there currently is a similar model with the Residential Tenancy Dispute Resolution Service (RTDRS), but this deals only with landlord/tenant disputes. Whether Service Alberta uses this as a benchmark for condominiums, remains to be seen.

“As I see it, the big chapters (in terms of number of condos) in Canada, being BC , Alberta and Ontario would benefit from having a tribunal to resolve legal disputes that would otherwise place a burden on the court system and on the wallets of the parties wanting dispute resolution,” says Jamie Bleay, a Vancouver-based lawyer who practices extensively in condominium law.

BC was the first province that had a dispute tribunal and Bleay has been involved with BC’s Civil Resolution Tribunal (CRT) since it started in 2016. The CRT resolves condo (called strata in BC) disputes as well as small claims up to $5,000 and recently added motor vehicle injury disputes to its purview. It prides itself on being quick and affordable by using a collaborative approach starting with their free online Solution Explorer program which walks the participant through the process on a step by step basis. It seems to be working as a participant satisfaction survey from 2019 said 84% of respondents would recommend the CRT. The goal of the collaborative approach is to provide timely access to justice by providing legal information, self-help tools and dispute resolution services.

“It has been identified for a number of years now that many people simply do not have access to the traditional justice system, made up of lawyers and judges and courts, because of their geographic or social location,” says Kate Campbell who is Vice Chair of Strata, Societies, and Cooperative Associations for the CRT. She says there was a need to increase access to justice in BC as it reached crisis point a few years ago.

She adds that factors that can make it difficult to access the justice system include money, time, the ability to travel to a courthouse or take time off work, childcare and language barriers. There have also been serious problems identified around delay in the court system, mostly due to volume and the increased complexity of litigation.

Another crucial part of the system that Campbell stresses, is the importance of mediation. “I think one of the big benefits of the mediation stage is having a neutral but informed person in the mediator role, to talk to the parties and define exactly what is in dispute. We refer to this as case management, and it’s key,” she says. “Often in strata disputes, the parties are neighbours, have known each other for a long time, and will continue to have a relationship after the CRT dispute is concluded.”

As an online tribunal, the CRT is available 24 hours a day, seven days a week. This means interactions with the tribunal and other participants can be done when it is convenient. They deal with disputes involving owners, tenants, boards or the strata corporation as a whole in a multitude of different issues. Complaints about managers are dealt though the Real Estate Council of British Columbia (RECBC) who are also responsible for manager licensing.  But there are some limitations to the system. The CRT does not have jurisdiction to appoint administrators, resolve allegations of conflict of interest by council members or handle developer concerns. However to date almost 1,000 decisions have been reached and the details of each case are posted on the CRT website for the general public to review and hopefully learn from.

Ontario has a condominium dispute tribunal as well, and its name is quite a mouthful. The Ontario Condominium Authority Tribunal Dispute Resolution System (CAT-ODR) began in 2017. Right now CAT only deals with access to records, which is the single most prevalent area of dispute between owners and condo corporations in Ontario, but a fairly large update to the system is being planned for December 2019.

“Based on user feedback and observations from the cases we’ve handled to date, this update will include improvements to streamline the dispute resolution process and to give the users more tools to work together to resolve their disputes,” says David Brazeau, Director of Communications and Outreach for the Condominium Authority of Ontario. “The update will also include support for multi-party disputes (cases involving three or more parties), so we can accommodate any additional dispute types that may come within our jurisdiction in the future.”

In November 2018, one year after CAT was created, an article published on the condoadvisor.ca website curated by lawyer Rod Escayola and his team at Gowling WLG, asking if the condo tribunal had delivered all that it promised to, found that issues that had been murky in the past now seemed settled. For example, corporations can charge fees for records, but they must be reasonable; they can refuse access to records related to litigation; and defeated parties can technically be asked to pay the legal fees of the other party, but this rarely happens.

CAT also has the authority to dismiss applications without a hearing if they are frivolous, vexatious or not initiated in good faith. To date (2019) CAT has dismissed two applications before they were accepted for being vexatious. Of note, The Condominium Authority of Ontario (CAO) which oversees the tribunal also is responsible for the mandatory director training e-modules that are free and must be completed within six months of being elected or appointed to a condo board. While mandatory training for condo board members is not required yet in Alberta, there is definitely a desire to explore options by numerous owners and managers in the province. CCI North Alberta has been offering a free “Condo Board Basics and Best Practices” course to its members for the last five years.

It is prudent to take all new ideas with a grain of salt. Todd Shipley is an Edmonton  lawyer who practices in condominium law and is also a CCI North Alberta board member. He says he has often found himself a lone voice reminding others to be careful what they wish for before the new condominium regulations came about in 2014. While he does say that creating a dispute tribunal is a good idea, he is of the opinion that we should proceed cautiously.

“When we talk about a tribunal situation, do I think that we need to have such a thing? Yes. But if it’s not done properly, you will see some abuse,” Shipley says. “And what people need to understand is that the worst thing about the court process is complexity and cost. And the best thing about the court process can be complexity and cost because it weeds out frivolous actions.”

Shipley says that when there are no significant consequences for bringing a dispute forward in terms of cost and complexity, cases that would never make it to court will emerge from the woodwork. “If it’s not carefully designed and managed, you’re going to be seeing disputes brought forward which would never have been brought forward before,” he says. “There are people that just make everyone’s life a little bit miserable, right? Those individuals, when they’ve got an axe to grind, and they’re not right and they don’t care, and they don’t want to hire anyone to explain to them that they’re wrong, now what you have is the risk of seeing matters that are more frivolous and/or vexatious and can advance because it maybe cost me $50 to do it, and I’ve got nothing better to do but to stew and obsess.”

By looking at other systems already in place, we see the possibilities of what Alberta’s could look like. The question is, what are the best attributes of each and how can we merge them to create the Alberta model? There is also the consideration of dealing with frivolous cases that may become more prevalent with the ease and reduced cost of a tribunal system. With litigation, you can be certain that the money being spent is worth it to have access to the traditional justice system. However, a tribunal system is cheaper, easier and more convenient and will enable those involved to be able to find resolution and get back to their lives much more quickly. Whichever form Alberta’s condominium dispute tribunal takes will have its pros and cons and will be unique for this province. We are somewhat privileged to not be a first generation in this process, as other provinces have gone before us to iron out some of the kinks in the system.